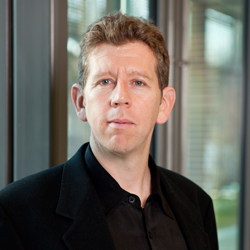 Tom W. Muir received his B.Sc (Hons, 1st class) in Chemistry from the University of Edinburgh in 1989 and his Ph.D. in Chemistry from the same institute in 1993 under the direction of Professor Robert Ramage. After postdoctoral studies with Stephen B.H. Kent at the Scripps Research Institute, he joined the faculty at the Rockefeller University in New York City in 1996, where he was, until recently, the Richard E. Salomon Family Professor and Director of the Pels Center of Chemistry, Biochemistry and Structural Biology. Dr. Muir is the Chair of the Department of Chemistry at Princeton.

In 2011, Dr. Muir joined the Princeton Faculty as the Van Zandt Williams Jr. Class of ’65 Professor of Chemistry. In 2015, Professor Muir became the Chair of the Department of Chemistry. He has published over 150 scientific articles and has won a number of honors for his research, including; the Burrough Wellcome Fund New Investigator Award, the Pew Award in the Biomedical Sciences, the Alfred P. Sloan Research Fellow Award, the Leonidas Zervas Award from the European Peptide Society, the Irving Sigal Award from the Protein Society, the 2008 Vincent du Vigneaud Award in Peptide Chemistry, the 2008 Blavatnik Award from the New York Academy of Sciences, the 2008 Distinguished Teaching Award from The Rockefeller University, the 2012 Jeremy Knowles Award from the Royal Society of Chemistry and a 2013 Arthur C. Cope Scholar Award from the American Chemical Society. Dr. Muir is the recipient of a MERIT Award from the US National Institutes of Health and is a Fellow of American Association for the Advancement of Science and the Royal Society of Edinburgh.